Sometimes, a little gardening knowledge is a burden too difficult for the gardener's soul to bear.  We see things that others don't, the subtle hues that don't belong, the texture that doesn't blend, and it tears at us, ripping away the mantle of civil society and bearing the dark soil within.  We try to seek justice, try to shift the weight of wisdom off our shoulders, but find no relief.  Such it was with ProfessorRoush this past week. 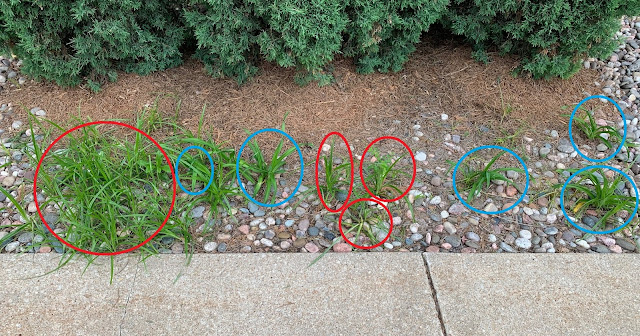 Every day, as I come to work, I pass the simple bed pictured above along the sidewalk, a few short yards to the left of the entrance.  On May 30th, I noted with some amusement the overgrowth of yellow nutsedge in the bed (circled in red) among the struggling daylilies (circled in blue), and brought it to the attention of the individuals who oversee the care of the bed, passing along both my identification, my recommendations for a nutsedge-specific herbicide, and my general angst at discovering this unholy mess outside my workplace.

Today, I noticed that the bed had been sprayed (see the photo directly below) and that all the plants were dying, nutsedge and innocent daylily alike.  Obviously this area was sprayed with glyphosate or some other non-selective herbicide.  While my call to arms had been heeded, my renowned advice had not. 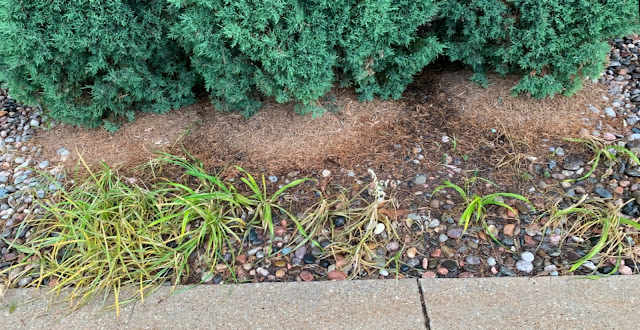 While cogitating this distressing development, reeling and staggering from the renewed load placed upon my shoulders, I meandered to the beds on the right side of the entrance, and realized to my horror that these beds were no better, in fact far worse, than the original abomination was.  Preserving them for prosperity, I present them here for you to ponder: 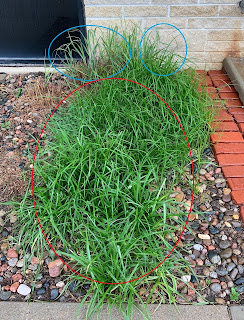 Bed portion 1; Containing a world-beating crop of yellow nutsedge (circled in red in the foreground), with some barely surviving ornamental grass in the back (circled in blue).  I think this grass was originally Panicum 'Cheyenne Sky' or something similar. 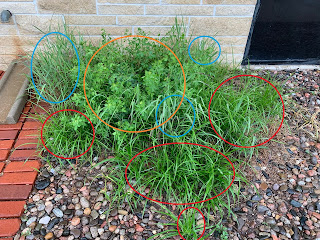 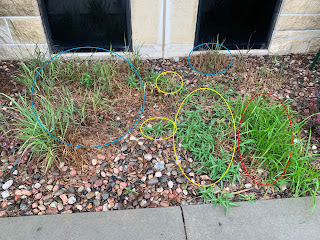 Bed portion 3:  A miserable grouping of ornamental grass (blue circles), common dayflower (yellow circles) and yellow nutsedge (red circle).  The common dayflower, as you know from my previous rants thereof, is a virtually indestructible weed in this region.


I shall suffer on here, sickened by the senselessness of the slaughter I've seen, but not in silence, nay, I have again unleashed the furies of  unsolicited advice on the herbicidal unwashed.  Unrequited, I may soon have to resort to guerrilla gardening in the shadows of night, spray bottle and trowel in hand, a furtive figure following a path to futile madness.
Posted by ProfessorRoush at 4:06 PM