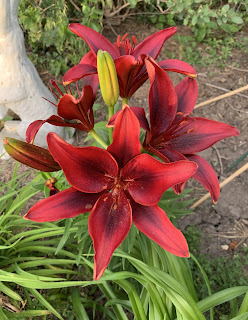 "Arf, Arf, Arf;" the neighbors dog, Huck, was barking incessantly last night as I traipsed around the garden, trimming dead canes off a rose here, transplanting a rose or two there, and watering seedling, just-purchased roses.  Eventually, Bella and I sought him out, curious as to what he had found on the prairie, 20 feet off of my neighbor's driveway.  I was betting snake, but as it turned out, I was quite wrong.  The dog had found a large turtle, probably a quarter mile west and above our pond, heading straight as an arrow towards my neighbors pond, across the blacktop driveway and another quarter mile down the next draw. 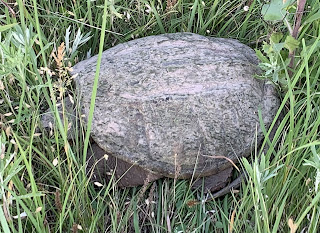 This seemingly ancient creature is a
Snapping turtle, Chelydra serpentina, identified by its long tail and ridged shell.  Yesterday evening, that turtle's tail was as expressive as any dog's, flipping angrily whenever Huck got too close.  Hunkered down for the photo here, he just wanted to be left alone on his journey, presumably in search of more abundant food or agreeable mate or both.  As always, when I run across such creatures, I do a little reading, and found out from Wiki that the folklore about snapping turtles biting off fingers and toes is just a myth, with no confirmed cases.  Although they can certainly apply a painful bite, and while you shouldn't pick one up by the shell because their necks can stretch completely around their armor, they actually have less bite force than a human.  They often live 20-25 years, with a maximum reported age of 38 years, so I wonder what the chances are of this being the same just-hatched turtle that my daughter found during a 2014 burn?  Probably not a likely coincidence but it's fun to think about it. 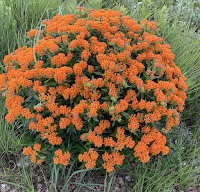 Up until the turtle, it was a peaceful evening in the garden.  I had spent some time admiring the first blooms of some dark red Asiatic lilies (photo at the top) that I planted as summertime filler among the viburnum bed.  There used to be other colors and varieties planted in the bed, but the only long term survivors seem to be deep red.  Not that I'm complaining, because I swoon over that dark rich color against the green of rose and viburnum foliage.

I have and encourage other fillers in these beds, but I count on serendipity and Mother Gaia to supply the most important.  Everywhere that the Butterfly Milkweed,  Asclepias tuberosa, (left, above) decides to show up as a "weed," I let it remain in all its orange glory.  In a similar fashion, I'll allow any Common Milkweed (Asclepias syriaca) (right) to grow unmolested in any bed.  The fantastic fragrance of these wildflowers, especially the Common Milkweed, are an early gift to me, and their value as a food source for caterpillars and butterflies make them all keepers in my gentle garden.

Turtles and milkweed were the sendoff last night for me to seek satisfied slumber with dreams of butterflies and blooms.
Posted by ProfessorRoush at 8:53 PM