Let There Be Columbines 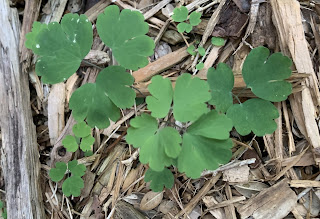 Last night, letting the vivacious Bella out the front door for her evening attempt to apply liquid fertilizer to the buffalograss, I was taken by surprise to see a previously-barren corner turned green.  This particular corner of my front border is almost entirely shaded with the house and garage on the south and west sides, and it was previously occupied by a boxwood, whose massive overgrowth and cat pee stink every spring right outside the dining room finally induced me to eliminate it in April.  You can see the stump of the boxwood at the upper center of the picture below.

Earlier this summer, I had tried to replace the boxwood with a rather expensive willow, one which promptly got eaten by rabbits or pack rats or some other such ravenous rodent and then, encased in chicken wire (too little, too late) its fragile regrowth shriveled in the late June heat.  Resigned, I decided to wait until fall to try it again, and I promptly put this space out of sight and mind for the summer that has past. 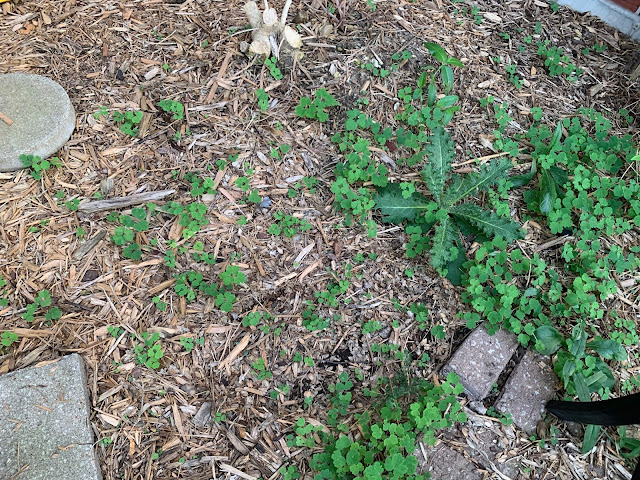 But here, last night, I found that the dry sterile mulch had brought forth baby columbines!  "Behold," the Lord said "Let there be columbines, and there were and it was good."  Well, columbines and a couple of thistles, which might not be so good, but I can take care of that bristly interloper. And a common dayflower or two which will take a little more effort to eliminate.  I'm still grateful for the gift, however.  All that time that the boxwood grew and dominated the area, these seeds collected and hid in the mulch and waited until the day they could grab enough sunlight and nutrients to grow.   A miracle of three-lobed glory.

I'm thrilled to see the columbines.  You know that I'm partial to the self-sown blue and purple columbines that dot my front landscaping, and I can't wait to see what these bring next year. There is no chance whatsoever that I'm going to scratch these out.  Next year, I'm going to have a sea of columbines and the joy of a wave of blue to ride into a new gardening year.
Posted by ProfessorRoush at 7:44 PM