Yesterday was an outside day in ProfessorRoush-land, work to be done, and some exploration in areas that I don't frequently explore.  I mowed and piddled in the garden to my heart's content, the second mowing of the year starting at 9:30 a.m. and then doing other chores until I looked up at last to see it near 5:00 p.m., the afternoon vanished seemingly in seconds.   Most of the work was prompted by the arrival this week of the Longhorn cattle that a friend (actually the son-in-law of a neighbor), summer pastures on our land and the neighbors pasture.  Aren't they beautiful?  ProfessorRoush likes having cows around, even skinny cows with big menacing horns, and they make a conversation piece for neighbors far and wide, creating a little traffic on the road from the townies coming to "Aw" and stare. 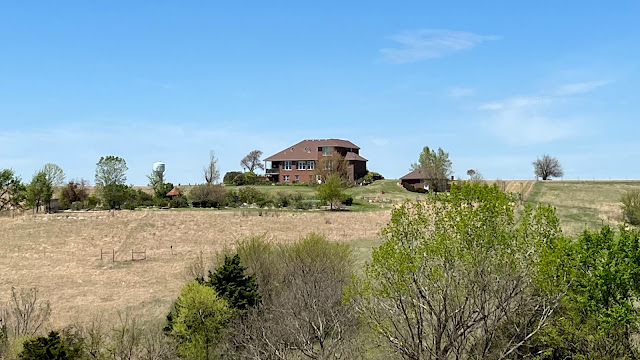 The Longhorn appearance, however, prompts me annually to walk the far fence, the one that I DIDN'T rebuild when we purchased the land, my border line with the golf course.  It's an original, easily over 50 years old, maybe more like 80 years old, with Osage Orange posts that occasionally get caught in the burns, and I often need to hike up the back hill with a new T-post to shore it up.  The picture below is a view of my back garden and the house and grounds from the far hillside.  Yesterday, all was well with the fence and I opened the gate to let the cattle into my pond area.
Walking that fence line means I walk down through the prairie and cross the woods in the draw and come as close as I get in this area to shady woodland.   This time of year, that means looking at the flora of the prairie more closely.  The prairie is coming alive with its flowers, native Babtisia starting to bloom, and this White-Eyed Grass (Sisyrinchium campestre) blooming everywhere.   White-Eyed Grass is, of course, not a grass but a member of the lily family, a bulb, used by Native Americans to treat stomachache and hay fever.

I also ran across this unusual plant, an invader of course.  Garlic Mustard (Alliaria petiolata) is a biennial weed that came from the Old World and escaped cultivation.  It isn't very prevalent on my prairie, requiring a bit of shade and moisture to thrive, but it seems to have found a spot here in the woods for it's temporary liking. 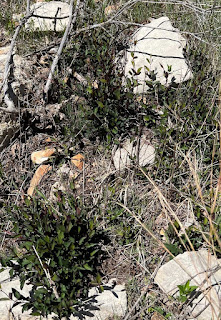 And speaking of invaders, while on my travels through the pasture, I also came across this unusual plant, seemingly beginning to spread in this area.   This is Purple-Leafed Honeysuckle, an escapee from my landscaping, which I made sure to come back and spray with herbicide yesterday.   I believe this clump was actually transplanted by the bulldozer that cleared it out from a bank where I placed the barn and pushed it into this area, but I surely don't want to see it begin to spread on it's own in the pasture

The woodland plant pictured here is, of course, not so desired in a woodland, but it's everywhere, hiding among others and waiting to cause pain and misery in some.  As shown here, among several similar plants, it effectively camouflages itself in early spring and then stands out in early Fall with bright red leaves to match the bright red blisters of the afflicted. Luckily, I'm immune to the toxic effects of  the urushiol in poison ivy (Toxicodendron radicans), but I know it causes misery in others.  "Leaves of three, let it be," say some, but I say "Leaves of three, I don't care."  It probably has some place in the ecosystem, a native to North America, so I leave it alone.

Posted by ProfessorRoush at 11:38 AM