I believed for the longest time, right up until I began to research the rose for this blog entry, that Chuckles was a Griffith Buck-bred rose.  But it isn't a Griffith Buck rose, 'Chuckles' was, according to www.helpmefind.com, bred by Roy Shepherd in 1958.  How did I get it so wrong?  In this case, there is a perfectly simple explanation.  I swear that I'm innocent, Your Honor.  I purchased my 'Chuckles' from www.heirloomroses.com, where it is listed as a Griffith Buck rose.  It is not, however, listed as a Buck rose on Iowa State University's website or anyplace else.  Heirloom just has it wrong.  'Chuckles' was bred from a seed parent cross between 'Jean Lafitte' and 'New Dawn', and the pollen parent was 'Orange Triumph'.

She's also not a shrub rose, as I previously thought, she is classified as a Floribunda.  I can see that now, the profuse bloom and intense garden presence of the bush. 'Chuckles' is a continuous bloomer in my garden, rarely without a few eye-catching blossoms. 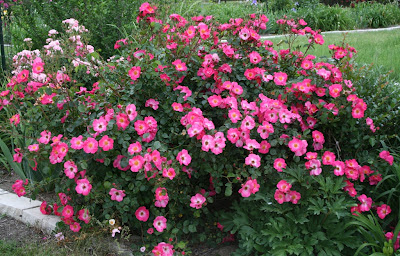 What I haven't been wrong on are all the parts that are dependent only on my eyes.  'Chuckles' is a low growing rose, about 3-4 foot tall at maturity in my garden, and almost 6 feet in diameter. The blooms are mostly single with 4 petals, but they are large in diameter, almost 4 inches across. The blooms are an eye-searing hot pink, a color that I did not like initially, but one that I've developed a taste for.  Each bloom also has a bit of white at the center, and they come in clusters, with new blooms, older blooms, and buds all visible in the same cluster as you can see in the picture above.  Stamens are golden on new blooms but fade quickly to brown.  There is little to no fragrance to the rose, but, then, nobody's perfect.  The bush is perfectly hardy here, in 5A/6B, and it is probably hardy far to the north since I saw it listed on a website named "LandscapeAlaska".  I never spray her for blackspot or other fungal diseases.  Look at that perfect foliage above;  glossy, dark green, and unspotted.  She's at peak right now in my garden, and has come into her own in this, her 6th year in my garden.

Most importantly of all, 'Chuckles' is one of the most aptly named roses of rosedom.  Anyone in her presence can't help but be cheered up by a single look of those bountiful bright pink and white blooms.  If I were to design a garden for a depressed friend, 'Chuckles' would be a necessity.  Heck, all of us could use one or two 'Chuckles' in the garden to cheer us up from time to time.
Posted by ProfessorRoush at 11:29 AM