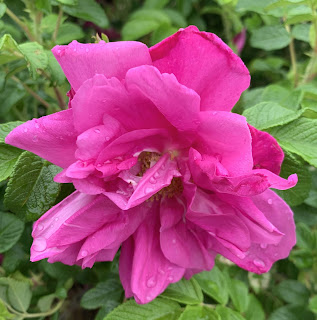 ProfessorRoush is proud to present to you, 'Moje Hammarberg', an astonishingly well-behaved Hybrid Rugosa born of Swedish origin in the same year as my father, 1931.  I planted Moje (pronounced "moyeh") two years ago as a mail order waif, wondered if he would survive the first winter here, and then fretted as he waited out the sodden swamp of solid clay where I planted my rose garden.  Despite my pessimistic expectations, however, in this instance his obvious Rugosa genes have come through and he looks like both a keeper and a survivor.  Well, a keeper so long as he continues his current healthy manner.
Moje may be a native Swede, but he fits none of the typical statuesque stereotype that a Midwest American expects from that far Northern country.  Moje is not a Viking warrior reincarnated in rose form, he is more representative of a squat little hobbit hiding behind the more heroic figures in the garden.  Of unknown parentage, the only thing for certain about Moje is that he must have some Rosa rugosa 'Rubra' in his immediate forebears, expressed in classic thick, wrinkled  and very dense foliage and a distinct tendency towards the mauve petals of the Rugosa genes.  There is, as expected, no blackspot or disease on this rose and he seems impervious to rose rosette virus as expected of that foliage. 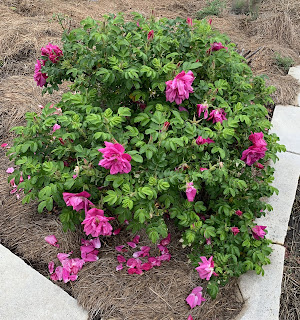 Unlike many of the Rugosa's however, Moje is a complete gentleman and very diminutive in habit.  Rounded  and contained, at two years of age, he stands about two feet tall and two feet wide, healthy, but not overly vigorous.  His eventual size is reportedly only 3' X 4' from most sources (Peter Beales is alone in listing he could reach 6' tall), a tiny compact mass of restrained Rugosa hardy to Zone 3b.  In fact, he's shown absolutely no signs of suckering as yet, one of only two Rugosas in my garden to completely avoid that irritating tendency.  In that regard, he resembles my 'Purple Pavement', front and center in another bed only 20 feet away from Moje.  Perhaps those two polished specimens will have a good influence on the comely but aggressive 'Fru Dagmar Hastrup' in their vicinity and serve as an example to repress her wanton ways.
The large blooms of Moje, however, are not nearly as tidy as the plant and are, in fact, a fairly unimpressive 17-25 petal mop head of mauve crepe similar in appearance to the larger and more vigorous 'Hanza'.  Suzy Verrier, writing of Moje in her Rosa Rugosa, charitably describes the 3-4" wide blooms as "lovely, large, and asymmetrical,"  which is a very nice way of saying that they have form, but no substance, color without sophistication.  Peter Beales, in "Roses" describes the blooms as "nodding," and I would agree that they seem to hang from the bush to some degree.  Moje does, however have a strong spicy Rugosa fragrance and reportedly forms large hips in the fall, which I have yet to see.  He repeats sporadically but always has a few blooms around to display, albeit the display is nothing to get especially excited about.

You can probably tell that I'm less than enthusiastic about Moje Hammarberg, disease-proof as he may be.  It's not that he's a bad rose, he's just...uninspiring, although the members of  helpmefind.com/rose disagrees and label him "excellent."  At this stage of my experience with him, I'd recommend him as a decent basis for a rugosa hedge, perhaps for those living in salt-prone regions, but I wouldn't expect him to be the centerpiece of a garden.  He's a workhorse, not a fancied up Dressage, prancing around in splendor.
Posted by ProfessorRoush at 7:10 AM