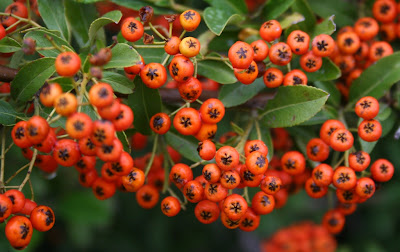 I don't know how most gardeners deal with "Firethorn" or Pyracantha, but over the years, I've found it a somewhat difficult plant to place.  It's a great shrub for xeriscaped landscapes in Kansas, and semi-evergreen to boot, but most cultivars are enormous when mature. Even the most refined forms get pretty large and can overwhelm a border.  The form most often recommended to gardeners, of course, is Pyracantha coccinea 'Lowboy', a specimen that only grows about 3 foot tall.  Be forewarned, however, this cultivar still spreads like its brethren, however, often to 6-9 feet in diameter.  My 6 year old specimen is currently about 4 feet tall by 6 feet wide and still spreading.
Pyracantha is best known to gardeners for the really nice Fall display of bright orange berries as shown in closeup to the right, but this is a good multi-seasonal plant.  It is said that the berries attract birds and provide food in the Winter, but they seem to last on the bush till late Winter, so it seems likely that the birds consume it only in desperation.  In Spring, the shrub bears small white flowers that are enticing to honey bees, and it keeps the leathery, dark green foliage well through the driest of Summers (like this one), often turning a bit burgundy with late Fall and Winter.   Most sources list it has hardy to USDA Zone 6, but I've never seen damage to my Zone 5B plants. There are times in early Spring when I think it looks a bit ratty, but it quickly shapes up as the weather warms.   There are some wicked thorns, of course, but that attribute just makes it a good choice for planting below the windows of a young daughter's bedroom, in anticipation of her teen years and the creatures that may be attracted to the gardener's abode at that time.  Nothing is better than a barrier of well-grown Pyracantha or a stiff shrub rose for cooling the ardor of a teenage boy. 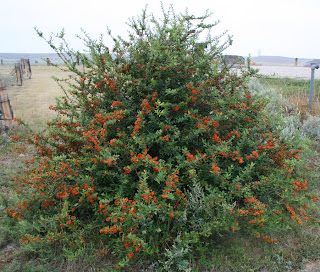 I initially placed a 'Lowboy' into my back patio border in 2000, but it grew quickly to smother several surrounding perennials.  The thorns make this a plant you don't want to have to thin on a yearly basis, either.  Then, in 2005, I noticed a small trail leading under the shrub, and in late winter, as the leaves thinned out, I realized that while Pyracantha is impervious to deer, the prairie pack rats think that it is a good foundation for a communal dwelling.  Since I detest the little creatures, providing them shelter approximately 10 feet from my back door was not a favorable idea, so I thinned and shortened the spiny branches at some risk to my dermal covering and then burned them out, protecting surrounding plants as best I could by a constant spray of water.  So much for Pyracantha in my borders.

But, since I like the shrub and the Fall display it provides, I decided to place another specimen out on its own, farther from the house where an occasional pack rat colony wouldn't give me conniption fits and where the beauty of the shrub could romp unrestrained without danger to more refined perennials.  It sits now in my far front yard, sited so as to obscure the electric box and water meter from view of the house, in a manner recommended by any and all landscape manuals that the Extension service provides.  See, you can't see the electric box at all in the picture above.  Nor the pack rat colony growing at its base.  I did warn you, didn't I, that there are times when it looks ratty?
Posted by ProfessorRoush at 2:57 PM