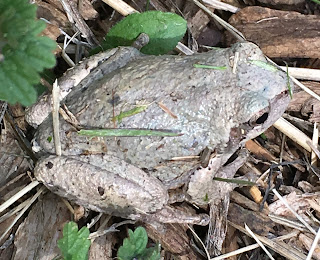 Froggy jumps and Froggy crawls,
the Gardener has disturbed it.
Sluggish blood moves icy limbs,
New Spring has come to stir it.

Turtle tramps and Turtle creeps,
the Gardener has perturbed it.
Passions lift the heavy shell,
no distance can deter it.

That's the way of life and time,
both move on despite our wills.
Love and mating drive our minds,

to chance the danger for the thrills. 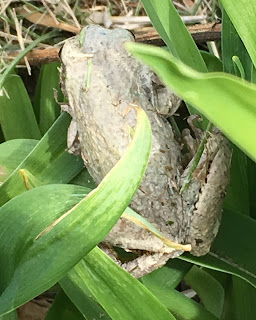 My quiet and lonely winter garden came alive two weeks ago with other creatures besides the berserk Bella and her frisbee-throwing owner.  First, there was Mr. Frog, disturbed by my invasion of his daylily patch home and upset that I was spreading grass clippings across his neighborhood.  This Cope's Gray Treefrog was a little slowed by the remaining chill in the air, so he didn't startle me by jumping from between my feet.  He also didn't stay around to watch my activities very long, thankfully, since frogs make me uneasy when they watch me work.   I do like, however, knowing that my garden environment supports these fragile amphibians, even if they are probably munching on the daylilies.  Couldn't they just eat the henbit? 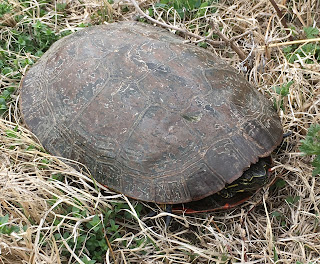 Just one day after meeting the first frog of 2017, I was in my front garden beds when I heard Bella frantically barking in the backyard, a bark that said "Attention! Intruder! Come Kill It!"  Intrigued, I moseyed around the back to find a perturbed painted turtle (Chrysemys picta marginata) peering cautiously at a bellicose Bella from underneath its scarred shell.  This turtle was a long way from its aquatic habitat (presumably my pond) and had meandered up and across the tallgrass prairie to the buffalograss of my backyard, a distance of several hundred yards. 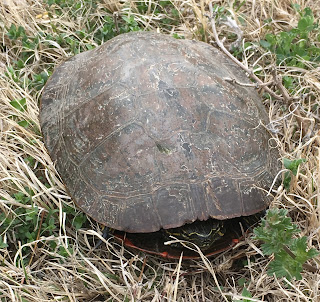 Since it is mating season for these lumbering lunkheads, however, there was no mystery about its willingness to climb relative mountains.  As an adult male of my own species, who was once a teenager, I am well aware of the idiotic and dangerous feats one attempts for the possibility of female fraternization.  My first roller coaster ride at 16 years old (I was terrified of them at the time), was initiated at the impromptu invitation of a comely lass of my own age.  I stood in line for the world's tallest coaster and rode it, without a nice hard shell or a scant prayer of survival, yet convinced by testosterone that it was a worthy way to die.

Ah, love!  It does indeed make the world go round, or at least in my case, it makes the prairie come alive.  I'm willing to indulge a little amore in my garden as long as the snakes don't come lookin' for lovin'.  Adam and Eve aren't the only ones who had fun in the garden but skedaddled when the Serpent showed up.