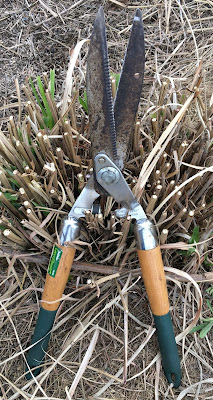 TIL, for those gardeners who are not yet hip to Reddit, is shorthand for "Today I Learned" in millennial-ese.  ProfessorRoush was introduced to Reddit by his two millennial children, but I still need an internet Urban Slang Dictionary on standby every time that I venture into a new subreddit.

Anyway, TIL (actually I discovered on my own) something about the hedge shears pictured to the right.  I was using them to chop down some of my thickest Miscanthus clumps; you all know the massive monsters that I'm talking about, resistant to chopping, too slow to cut with a knife and too thick for easy trimming.  Some grasses fall easily to my battery-operated electric shears, but these demons have stems as large as 1/2" diameter, and are tougher than nails to cut with pruners.

To cut these mutants down to size, the best way I'd previously found was to insert the blades of the hedge shears around a section of grass, and then to slam the handles together once, twice, thrice, and more, over again and again with all my might.  It takes a lot of strength and energy to fell several large clumps this way, but I know of no better alternative; all my electric pruners simply clog up and stop on the thick stems.  A chain saw might do it, but I've never tried one, for the simple reason that I hate the loud, noisy, stinking things.

I've always wondered, however, about the reason for the wavy edge on one side of the blade (look closely at the left blade on the photos) of my manual hedge trimmers.  The only internet sources I could find that described it suggested that the wavy design "grips branches for solid cutting."   What I discovered today, however, is that if I pulled back sharply just as I closed the blades, the shears slice through the thick grass in MUCH easier fashion, like scissors on steroids.  Wow, what an epiphany!

This leaves me, once more, wishing I had a horticultural education so that someone would have taught me the correct way to use these shears sometime before my 57th birthday.  In fact, however,  now I wonder if the trick is taught anywhere.  I consulted Jeff Taylor's Tools of the Earth, and found nothing other than the repeated idea that the serrations hold the branches for cutting. Likewise, William Bryan Logan's The Tool Book discussed the wavy edge as an improvement for holding twigs, but left out this little technique of slicing.

So, for those of you who use this type of hedge shear to trim back your heavy grass clumps, give this technique a shot.  For the first time ever, I'm actually looking forward to cutting down Miscanthus.  I'll have to wait for next year, though, because the work went fast today.   I'm done cutting back grass in my own garden, and I'm not enthused enough to go find another garden and cut down some more right now.  I'm thrilled, not crazy.