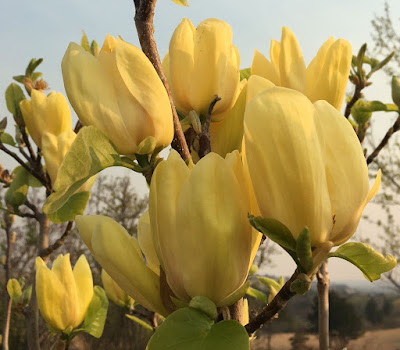 Well, the forsythia bloom got slaughtered sometime this winter, and my red-flowering peach was a bit of a dud this year, but for some unfathomable reason, the magnolias here all bloomed better than ever, not a hint of winter damage.  I can only conclude that at some critical moment during development, the buds of the former were blasted by a cold night, while the fuzzy plump magnolia buds just kept on ticking.  I know we had one night of -10ºF in December, but it seemed like a mild winter overall.  My roses, however, were also blasted back to the ground, even some of the hardiest.  Somewhere, either the winter dryness of the prairie or some extremely cold night was harder than usual on the plant material. 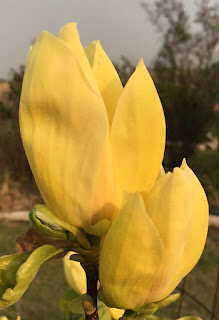 Anyway, as you can see from the photos, Magnolia 'Yellow Bird' has lifted my spirits for nearly two weeks and she continues to bloom today.  I thank my lucky stars for the day I snatched this up at a local nursery, pricey, but worth every penny for its weight in gold right now.  I'd been holding my breath for weeks, watching and waiting for these buds to shine free.

'Yellow Bird', which started out from a two foot tall twig, is now topping 6 feet tall.  This year her blooms came out before the foliage, so I didn't think she was quite as "showy" as she normally is when these blooms burst from the green foliage background, but she certainly didn't hold back her abundance.  Her appearance isn't helped by the wire cage she lives in, but I'm not about to let the deer damage her.  Someday she can rise above all this. 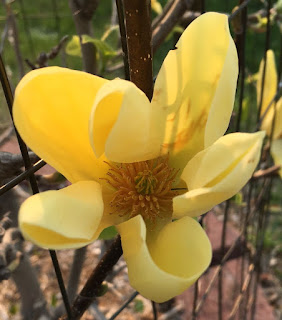 'Yellow Bird' is scented, but not as heavily as my other shrub magnolias, 'Ann' and 'Jane'.  I would describe the scent as a light citrus-y fragrance.  But, always the cynic, I wonder if I'm imagining it because the bright yellow blossoms remind me of lemons and are nearly as big?

Her bloom began this year around April 10th, opening quite a few at once when we had two warm days in succession as seen on the picture on the left, below.  She opened almost everything, a vast orgasmic display, by four days later when the picture on the right was taken.  People, I'm in love. 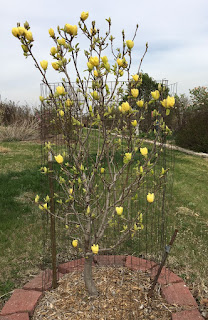 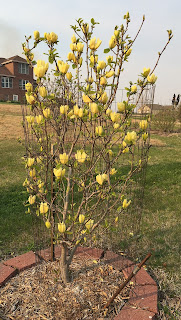 Posted by ProfessorRoush at 9:43 PM