As he works around the garden, ProfessorRoush always keeps an eye on his areas of native prairie for unusual forbs and for the date of annual blooming of the early forbs.  Right now, while the prairie grass is still low from the spring mowing, I noticed two low-growing grasses shouting for attention.  Well, I thought I noticed two low-growing grasses.  ProfessorRoush was wrong again.   Repeat after me:  grasses are hollow, rushes are round, and sedges have edges.  Each belongs to a different taxonomic family, and even the most amateur botanist (like me) should strive to recognize that they are distinctly different, even more so than Chihuahua's and Great Danes. 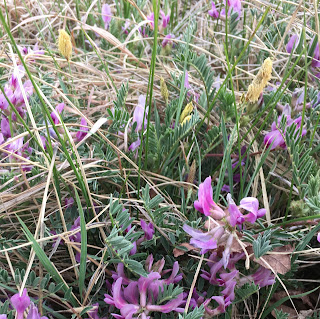 The nice little yellow thing above is Mead's Sedge (Carex meadii), which seems to grow everywhere as an understory for prairie grasses.  When it is interspersed with the purple of ground plum (at right), the soft yellow and purple hues make the nicest little microcosm of spring pastels.  Mead's Sedge is a triangular-stemmed sedge named for Samuel Barnum Mead, (1798-1880), a U.S. botanist and physician.  It prefers limestone or chalky soils, which describes my ground in spades (sic).

Every spring, I also see these little fluffy club-like heads pop up, another "grass" that I notice.  Well, this is actually Antennaria neglecta, also known as Field Pussy Toes (as listed at www.kswildflower.org), or Field Cat's Foot (as listed in my copy of Tallgrass Prairie Wildflowers).  Of the common names, I think Field Pussy Toes is a much more interesting name, don't you?  Antennaria neglecta is a member of the family Asteraceae with the sunflowers.  I've seen this growing for years among the grass stems and assumed it was a grass, but when you look closer, the bases of these flowers are the white-gray-woolly leaves laying flat on the ground.  It grows in colonies and although it is dioecious (bears male or female flowers on separate plants), each colony is a clone and is either a male or female colony.  The photo at left depicts the male, or staminate, form for those who care about such niceties (yes, I peeked). 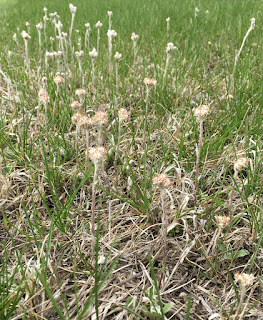 In Kansas, Field Pussy Toes have to be differentiated from Parlin's Pussy Toes (Antennaria parlinii).  The latter has leaves that are shinier and have less "hair."   While my Field Pussy-Toes live in environments suggested by their name (i.e. prairie fields), Parlin's Pussy Toes prefer rocky oak-hickory forests and glades.   For those who are interested in having Pussy Toes in their own gardens, Monrovia has a pink form, Antennaria dioica 'Rubra', available for sale.

As I've noted before, each year I try to remember to note the return of the early species to my prairie in my field guides, and for Field Pussy Toes, I've noted their first occurrence anywhere from March 25th to May 4th, with the earlier date from 2012 and the later from 2002.  Field Pussy Toes, like many other species on my prairie, seem to be pushing their growing/flowering period earlier, supporting the global-warming crowd.  On the other hand, I've got 3 dates written down for Mead's Sedge; 4/10/2000, 4/15/2003, and 4/10/2017, and its appearance is not apparently changing over time, supporting the climate-change deniers.  Who knows?