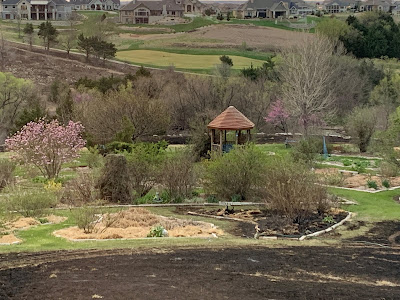 ProfessionRoush had a fine spring day for a nice neighborhood burn yesterday.   My neighbors and I marshalled our energy and the considerable mobile fire-fighting forces arrayed amongst them and set off on a dew-covered morning to clear the prairies of weeds and invading alien plants through the ritual spring burn.   With almost no wind, the dampness from the recent rains, and a beautiful sunny day awaiting us, we were blissfully at ease to hold a nice burn.

And then, everything changed.  I believe the first mistake was that the fires were going so well, ProfessorRoush's neighbor opened his first beer before we were on the downside of the day.   Early alcohol is always a bad harbinger of things to come.   And fairly early on, after all the tasks were assigned and the backfires started to protect the distant neighbors and greater Manhattan from our exuberance, we received a call from the county that burning had been banned for the day (after we earlier had permission for the burn).  A little too late for us, the forecasts had changed to show brisk winds later in the day.

We had completely burned the perimeters and I had safely burned around my garden and moved on to help a neighbor by 11:00 a.m.   The last neighbor's 20 acres took us almost as long as the other 140, with extra care taken as the winds were rising and we had a horse barn and arena to protect.  And then I looked up about 2:00 p.m. to see smoke coming from my back yard. 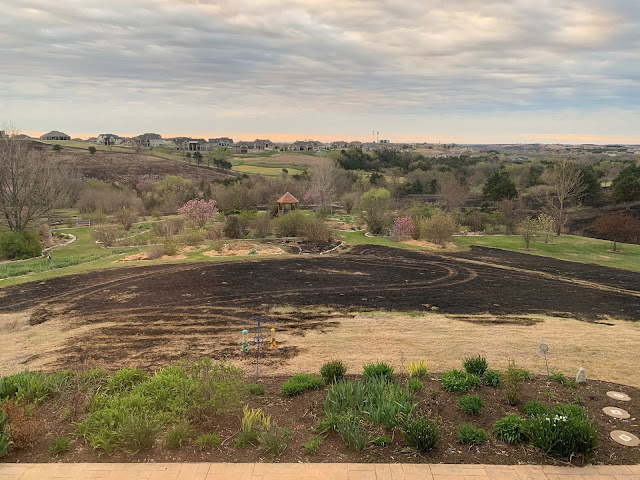 Unbeknownst to me, a little fire had made it into the grass mulch near my grapevine lines earlier and a helpful neighbor had put it out.   But, a little prairie-burning tip here from an old guy here, if fire gets to your mulch, whether hay, grass or bark, there's no putting it out.  You have to isolate the area to bare ground and let it burn itself out.  Hidden beneath a dampened cover of mulch, that little spark festered and bided time until the wind rose.

And then it scooted across the mown back yard and made it across the close-mown grass into one of my rose beds mulched with straw.  It's the bed on the right in the picture at the top.  Thank Heaven's grace, it was only one because I told Mrs. ProfessorRoush that if it was all of them, I'd have bulldozed the backyard and been out of the gardening business.  I'm not ready or spiritually willing to start completely over again at this stage.

I'm not worried at all about the grass between the house and my lower beds.  I had been contemplating burning it anyway because it had been 4 or 5 years since the area last burnt.  In 2 weeks this area will be beautifully green and I'll post another picture then to show you.  The daylilies and perennials of the burnt bed will regenerate.  And a couple of roses in this bed had already died or were ill from Rose Rosette and needed cleaning up.    There is enough Puritan in ProfessorRoush's soul to place considerable faith in fighting evil by burning.  But I'll mourn a little bit for 'Banshee' and Marianne' and "Chateau de Napoleon' until and if they regenerate.   Time will tell and life goes on.   Maybe I'll learn a new cure for Rose Rosette disease if one of the sick roses regenerates in fine shape.

Posted by ProfessorRoush at 8:35 AM