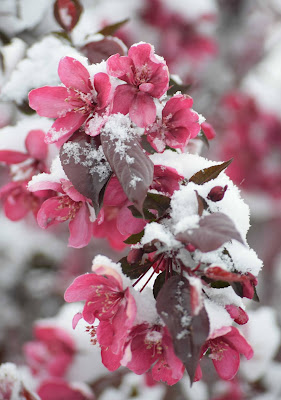 ProfessorRoush has a question mark on the title because I'm not entirely sure yet, but the 4 inches of wet snow last Monday seems to have hardly bothered the plants, and any real damage probably came in the next two nights with lows of 27ºF and a really hard frost one of those mornings.  A late snow does make some pretty pictures, however, even though I and this pink crabapple didn't appreciate it like we could have. 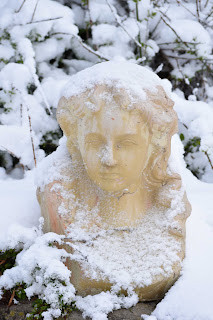 I know that you're wondering how all the plants fared, so I'll try to get right to that.  I'm actually pleasantly surprised that anything at all is left, as green and leafed out as things were, but almost everything came through with minimal damage.   Yes, it whacked the 'Ann' and 'Jane' Magnolias, but they were on their last moments anyway.   The variegated iris shown below has not even blinked, if anything, shining brighter today than ever. 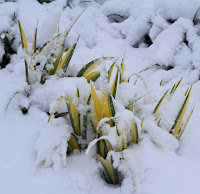 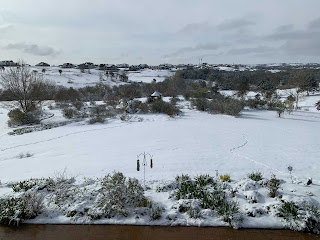 I think a lot of the damage was limited by the heavy blanket of very wet snow insulating all the plants and then quickly melting off.   Fantastically quickly as a matter of fact.  The picture at the left was taken around 7:20 a.m. on the morning of 04/20/21.  The picture below of the exact same view was taken at 6:38 p.m. the same evening. 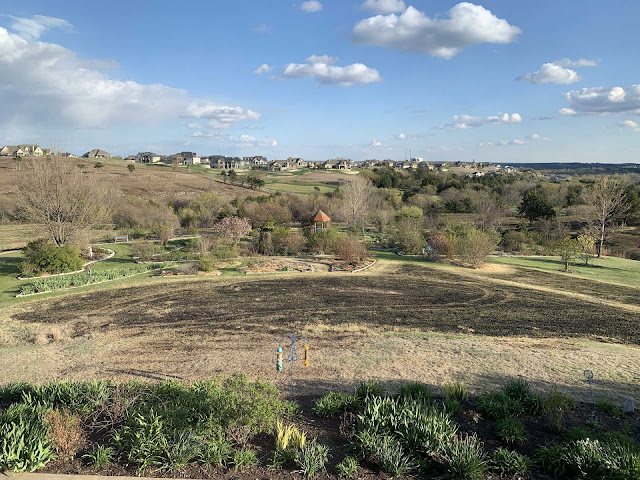 And the plants recovered just as quickly.   The picture on the left is of the fernleaf peony and tulips covered by snow, and on the right, just a few nights later.   That fernleaf was blooming fully beneath the snow and it never looked back.  You can click on them if you want to see them larger. 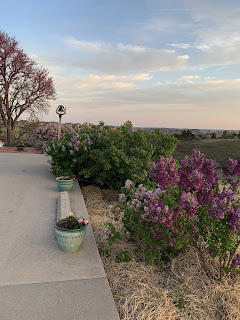 And the lilacs, the lilacs that I was so worried about?  Well, here are the row of lilacs tonight, and the exact same bloom from 'Declaration that I showed you in the blog entry from 4/20.  I think the cold seems to have lightened the blooms a little bit, but they have retained their fragrance and held up remarkedly well.   Stepping on my garage pad tonight, in the middle of a brisk wind, is like stepping into a perfume factory. 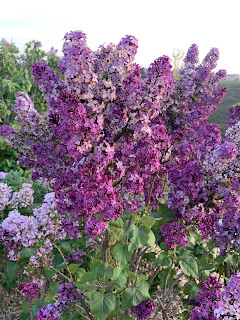 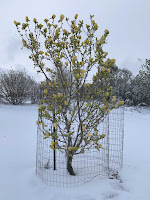 Last, but not least, I'm sure you're all wondering about my beloved 'Yellow Bird' Magnolia.   Before the snow, I thought it was going to give me the best show yet, the blooms just ready to peak on the exact day of the snow.  Well, I can't say it came through it unscathed, but I think it will survive to bloom another year.   The leaves that opened early are a bit frost-damaged, and the blooms are discolored up close (see below), but it seems to not be nearly so damaged as I feared.  And that, my friends, is my summary for the entire event; a near-heart-attack-inducing late spring snow that wasn't nearly so bad as I feared.   Thank you, God!
Posted by ProfessorRoush at 9:21 PM